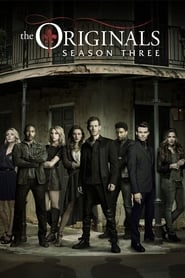 When Klaus learns that Cortez, an old vampire with a vendetta against him, has arrived in New Orleans, he finds himself forced to deal with this new threat. Meanwhile, when Cortez begins threatening the lives of innocent residents, Vincent has no choice but to help the vengeful vampire in his plan to take down Klaus. Elsewhere, Marcel turns to Davina for her help after several Strix members turn up missing, and Elijah confronts Hayley after learning that she’s been dealing with Jackson’s death in a destructive way.